The newest Texas Education Agency enrollment and graduation data for Texas public schools was posted in February on the TEA web site. I have been working today to update the old graph posted only with the enrollment data for last year. With this new data the progress that is happening in Texas schools is more than amply documented. Here is the initial draft of the graph I have made with the new data: 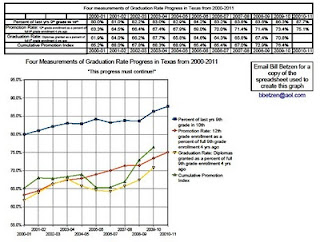 Click on the above chart to see a bigger copy. All four of these measurements tracked in the graph increased from 1.4 to 3.5 percentage points this past year alone with this update!  This is wonderful progress for schools representing 4,900,000 students! It is also significant progress on four measurements tracking the most critical factor in our school system, the deadly dropout rate. No single variable contributes more consistently to the crime rate in Texas than the dropout rate.

The probability of this progress continuing is in danger with the currently planned cuts in education funding in Texas. The time is long overdue to correct the state and local taxing systems in Texas. The 20% of families with the lowest incomes pay the highest percentage, 12.2% of their income, in state and local taxes.  The richest 100,000 Texan families, the 1% of the state with incomes over $463,000 annually, only pay 3% of their income in state and local taxes.  We have a problem! Texas definitely has the money. We only need to decide that education is a priority. See www.TexasFlatTax.com.

Here is a report card to use in helping to communicate the message to legislators that we will be watching for the effects of their current refusal to address equal tax rates for all Texans but instead cutting public education: 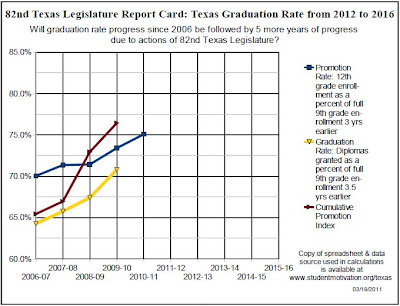 If anyone wants a copy of the spreadsheet, and all the numbers used in creating the charts above, please email bbetzen@aol.com.  I will continue to work on these charts to make them more useful. Ideas are welcome! Due to the budget crisis here in Texas it is urgent such updates on the wonderful progress in Texas education are known.  The damage a 15% cut in funding for education would do to this progress is frightening!
Posted by Bill Betzen at 12:49 AM No comments:

Trillions of hours of annual do-it-yourself (DIY) labor are the power behind our nation's ingenuity and growth. DIY work is also the power behind any student's success in middle school, high school, or college.

Until a student takes ownership for their own success in school, with personal goals they claim as their own, DIY efficiency doesn't happen. The process of setting life goals is a more normal process in small town and agrarian settings. It is too often lost in the rush of modern urban settings. If Texas inflicts the currently proposed budget cuts on our students, it will only be with expanding such DIY student efforts that current Texas Educational Progress will survive.

Texas secondary schools do not focus early enough, or strong enough, on the life goals students need to drive such DIY effort. Consequently students too rarely embrace the critical DIY ownership needed for their own education. School is something done to them, not something they understand as a resource toward personal goals. Thus one out of three Texas students drop out, one of the highest dropout rates in the nation!

By middle school the personal goals needed to drive DIY student energy should be expressed and documented.  Such goals should be a comfortable topic of conversation. DIY student ownership of the educational process should grow to dominate personal decisions long before high school graduation.

The School Archive Project started in 2005 with a strong focus on long-term goals. That focus, combined with dynamic personal leadership at the schools, has helped liberate the DIY student energy in the targeted high schools. The major high school targeted with this project has seen graduation rates go from 33% to over 60% in 4 years.    We are just beginning to see the power of DIY students empowered with strong long term goals.

Putting such goals into written form starts in the School Archive Project with parents writing a letter to their child about their own dreams for their child. That letter is then used by the student in writing a letter to themselves about their own history and goals for the future.  Both letters are placed into the same self-addressed envelope, one envelope for each student. That sealed envelope is then placed on the shelf for that class inside the 500-pound vault bolted to the floor in the school lobby. The vault is very visible and seen by students several times every school day, a reminder of the dreams and goals in their letters.  It is also a reminder of their planned 10-year class reunion when these envelopes will be opened. That is also when they will be invited to speak with then current students about their recommendations for success. They know to expect questions such as: "What would you do differently if you were 13 again?"

These 10-year class reunions should become a priceless source of feedback for teachers most dedicated to constantly improving their work with each new class of students.

The current Texas educational budget crisis requires new, tax free resources for our schools, including better ways to focus our students onto their own lives. Now is certainly when Texas needs such a low-cost, $1 per student (usually donated), resource as a School Archive Project in every secondary school. Our students must focus by middle school on their own long term goals, and update that focus constantly as they move toward graduation.  They must be motivated to work on their own DIY student efforts in order to get the education they will need to be employable in 2020.
Posted by Bill Betzen at 12:57 AM No comments:

Dallas media has often written stories giving false impressions that the dropout problems in Dallas are on the south side of Dallas. In 2008 that presumption was documented as being false!  That year the promotion rate, and potential for graduation, for high school students continued to be higher in the 9 Oak Cliff DISD high schools than in the 6 North Dallas DISD high schools. That was the third year that was true.  The difference had grown to one of 10.1 percentage points in 2007-08!! The 9 Oak Cliff high schools had 10.1% more of their 9th graders making it to12th grade! This measurement is called the promotion rate.

The 9 Oak Cliff high schools in Dallas ISD continue to hold the lead over the other areas of Dallas ISD with the highest combined promotion rate in 2010-2011.  They have the highest percentage of their 9th grade enrollment reflected in the full ultimate enrollment for the 12th grade three years later. However, they are only 3/10ths of one percent in front of the 6 North Dallas high schools. It is possible that in 2011-2012 North Dallas will pull in front of Oak Cliff for the first time in 8 years.  This competition and progress is good news for all of Dallas.  In this process the promotion rates for all areas of DISD have gone up 4 percentage points, or more, this year!  Look at the chart below to see how all of DISD is improving.﻿


Sadly, promotion rates are the only calculations possible by school from the online TEA database. Due to lack of such consistent graduation data nationwide, it is the measure the national John Hopkins University "Dropout Factory" study was forced to revert to using, and which has been repeatedly mis-interpreted as a "graduation rate" by the press nationwide. The TEA online database, and all similar state accountability systems in the nation, must provide graduation numbers by school.

Annual enrollment data, combined with graduation data, should also be placed annually into one multi-year spreadsheet for each school and school district so as to show student movement. This only amounts to the annual collection of 16 numbers: Early Education, Pre-K, Kindergarten, the 12 grades, and the number of diplomas granted that year. These 16 numbers collected for each school and school district each year, and added to the same spreadsheet each year, would lead to a revolution in public accountability and transparency. Seeing the patterns these 16 numbers form, when placed into the same spreadsheet with the same 16 numbers for each year going back 20+ years, can tell you more about a school or a school district than any other single sheet of paper. Such spreadsheets help parents and politicians to better understand the meaning of a "20% dropout rate" claim when 50% of the 9th grade enrollment three years earlier is missing at graduation for that acclaimed "20% dropout rate" class. Such spreadsheets may eliminate such misleading dropout rate claims.

Such transparency is mandatory!  It is leads to public accountability that is long, long, overdue. It makes it harder to hide children who are "missing at graduation."  It helps people know that questions need to be asked.
Posted by Bill Betzen at 1:04 AM No comments: