The power of expressed and documented parental dreams for a child cannot be over-estimated. The book "Dreams from my Father" by President Obama is only one example.

The School Time-Capsule Project has worked since 2009 to encourage parents to write such priceless letters to their child.  The response has rarely been higher than 30%.  Now a new approach is being used.  We are now asking students to write a personal letter to their parents asking for such a letter back to them. Instructions are attached to the student's request.

This major improvement to the School Time-Capsule Project was the idea of Ms. Kiki Lincoln, the Language Arts Coach at Quintanilla Middle School. She described it to me yesterday!  This is a big improvement!

Imagine that these 6th graders also ask their parents to include in that potentially priceless letter one story from their family history.  It should be a story that their parents want them to remember 30 years into the future, an important piece of their family story.

With such a personal request in a letter from their own child many parents will respond.

The resulting parental letter would then be studied by the child, often leading to discussions with their parents. That letter would be brought to school and used in Language Arts Class as students write letters to themselves about their own plans for the future.

Parents should be prepared to write such letters to their child every year from 6th through 12th grade, until their child graduates from high school.

A child changes a lot in just one year.  Each letter will be different, with a different story from their family history.  The more a child knows about their family history, both painful stories and wonderfully positive stories, the better.  It all helps ground a child in a valuable history providing a valuable foundation for life.

A written record is being created.

All the letters would be placed into one self-addressed envelope for each student and then stored in the school time-capsule, a 500-pound vault bolted to the floor in a prominent place in the school lobby.

If parents immediately see how priceless these letters are, they can certainly ask for photocopies of them to keep, or to place inside the time-capsule so that the originals can be kept at home.  That is certainly understandable, and encouraged if requested.

Each year the letters from the previous year would be returned to the child and parents for use in preparing to write the new letters.  That only changes with the 8th grade letter that is written with plans for 10 years into the future.  The 8th grade letters will remain in the time-capsule for a decade.

Students must also know that upon their return to get back their letters, 10 years after the 8th grade, they will also be invited to speak with current students about their recommendations for success.  Such priceless mentoring has already started at Quintanilla with the reunion of the Class of 2006 to retrieve the letters they wrote a decade ago.  It will now be an annual event, making the future ever more real for Quintanilla students.

In high school the annual letter writing pattern continues.  The final 12th grade letter will also be planning for 10 years into the future.

Imagine how powerful those high school 10-year reunions will be as students read their letters, and their parents letters, once again.  Most important, imagine the power of what these former students can say to students sitting in the same seats they were in a decade earlier!

These are the plans working within the School Time-Capsule Project as of May of 2016. We have just completed the second 10-year reunion at Quintanilla Middle School.

Graduation rates for Quintanilla students have more than doubled and continue to rise. The most recent School Effectiveness Index (SEI) for Quintanilla is the highest of all 35 middle schools in Dallas ISD! 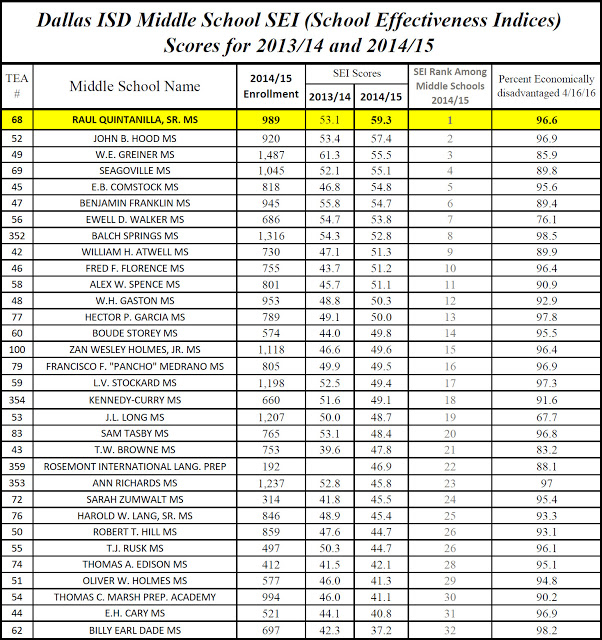 These achievements are all in spite of the 96 percent poverty rate for Quintanilla students which remains!  In addition, discipline problems and pregnancy rates at Quintanilla have dropped dramatically since 2006.  The best birth control is active personal planning for the future!

This year is the first year that all Quintanilla students will be writing letters.  It used to be only an 8th grade activity, but Quintanilla wants to raise their record SEI score even higher than the 59.3 in the above chart.  This change will intensify the focus on the future for all students.  Quintanilla will stay on top, unless other schools begin to have a more effective future focus with all of their students, the best competition possible for DISD students!


Actively planning for their futures, in cooperation with their parents, will continue to help students of poverty to achieve more like, and in some cases certainly better than, middle class students from any Dallas suburb!  The progress must continue!
Posted by Bill Betzen at 4:34 PM No comments: